Vienna- It's a story well known from books and movies: Beautiful Bavarian princess Elisabeth marries young Habsburg emperor
Franz Joseph and goes on to become Sisi, legendary Austrian empress.
The marriage took place in 1854 with full imperial splendour. But
whatever happened to her wedding dress?

Its whereabouts are shrouded in mystery. Only its silver
embroidery remains. The resplendent flower garlands today grace a
priest's robe which is now on display at Vienna's Sisi Museum.

Habsburg experts have little idea what happened to the rest of the
dress. And in an attempt to solve the mystery, the museum has asked the public for help.

It is calling on all Sisi fans, experts, collectors or relatives
of former court servants to help and provide information when
possible.

Museum curator Katrin Unterreiner said scouring archives brought
no results. The search was made even more difficult by the fact that
nobody knew exactly what the dress looked like and where it was made.

"
According to tradition, the bride's parents were responsible. So
it could have been made in Germany, maybe Munich,"
she said.

The mystery dress worn by 15-year-old Princess Elisabeth upon her
marriage to Franz Joseph was for the eyes of family and courtiers
only. "
There are contemporary pictures, but she wears a different
dress on every one of them,"
Unterreiner said.

"
We hope for anything that could help. Sketches, design,
anything,"
Unterreiner said. "
We believe that there still could be
something out there."


Following the tradition of the day, the dress was donated to the
church - in this case, to the basilica Maria Taferl on the Danube
west of Vienna, and the jewellery and veil to Altoetting in Germany.

Not an uncommon occurrence, said Christian Schueller, curator of
Maria Taferl's treasure room. The 30-centimetre-wide embroidery with ntricate flower garlands was cut from the dress and sewn on an ivory-coloured mantle that local priests wore until the 1950s,
Schueller said.

Clothes apparently were of little importance to Vienna's imperial
court, Unterreiner said. Little information on textiles and clothing
exists in old Habsburg archives and collections that can provide
information on almost everything else - from Sisi's monthly chocolate bill to her travelling apothecary, complete with cocaine syringe.

Neither the Vienna Sisi museum nor Schueller wanted to comment on gown's value. For fans of the restless and tragic empress, its
intrinsic value goes beyond mere money.

Elisabeth, never particularly popular during her lifetime owing to
her continued absence from court, found a huge following after her
murder in Geneva in 1898.

A formidable Sisi cult developed in the 1950s after a series of
internationally successful movies, starring actress Romy Schneider,
on a highly romanticised version of Elisabeth's life.

When a young Serb named Gavrilo Princip stepped forward on a Sarajevo street and fired a pistol at a middle- aged couple 93 years ago, he sent history stumbling down an unexpected path.
The targets, of course, were Franz Ferdinand, archduke of Austria-Este, heir to the Austro-Hungarian Empire, and his wife, Sophie. They were killed. The world went to war. Millions of people died and the political map of Europe was redrawn.
Now, Franz Ferdinand's great- granddaughter, Her Serene Highness Princess Sophie von Hohenberg (or Sophie de Potesta to her neighbors), is trying to right what she sees as one of the wrongs from those years. She hopes to get Franz Ferdinand's castle back in the bargain.
The 1919 Treaty of Saint-Germain- en-Laye carved up the old Hapsburg empire into new states: Austria, Hungary, Czechoslovakia, Yugoslavia and parts of Poland.
The Hapsburg family, which had ruled that part of Europe for more than 600 years, was stripped of its properties and titles.
Franz Ferdinand's children had already been turned out of their parents' beloved home, Konopiste Castle, in the empire's province of Bohemia, now the Czech Republic. It was taken by the state.
The problem, von Hohenberg says, is that Franz Ferdinand's children — Sophie, Maximilian and Ernst — were not Hapsburgs and so the castle and its dependencies, 6,070 hectares, or nearly 15,000 acres, of woodland and a brewery, should never have been seized.
That is because Franz Ferdinand married a woman a rung below his royal status. His uncle, Emperor Franz Jozef, would allow the union only on the condition that Sophie and any children she bore never be considered heirs to the throne. He gave the young bride her own title and a new name instead: Princess von Hohenberg, which has been passed down to her great- granddaughter.
In part because of the tension caused by his marriage, Franz Ferdinand preferred to stay at Konopiste rather than at his official residence, the Belvedere in Vienna. When he and his wife left for Sarajevo that fateful June, they intended to return in just a few days. The children were left behind in the care of nannies.
But Franz Ferdinand and Sophie died in Sarajevo and his children inherited Konopiste Castle, which he had bought with money from the sale of properties in Italy that he had inherited from his uncle, Francesco V d'Este.
By the time the Treaty of Saint-Germain-en-Laye was signed, von Hohenberg argues, the castle was a Hohenberg, not a Hapsburg, estate.
But in 1921, Czechoslovakia passed Law No. 354, whose Article 3 mandated the seizure of royal properties from the Hapsburgs, including Franz Ferdinand and "
his descendants."

"
What happened in Czechoslovakia was an overenthusiastic way of interpreting the Saint-Germain treaty,"
von Hohenberg said recently over tea at an elegant Brussels hotel. "
They associated my grandfather Max with the Hapsburgs, though he was not a member of the family any more."

The newly minted Republic of Austria seized all of the Hapsburg palaces there but left Franz Ferdinand's children with the Hohenberg properties, which included the Artstetten Castle where Franz Ferdinand and his wife are buried and where von Hohenberg's sister, Anita, lives today.
The children were sent to live in Artstetten Castle. The eldest, Sophie, was 17 at the time. She lived until 1990 and von Hohenberg remembers her stories.
"
What has always shocked my family is that our whole history, our private history, the letters, the photos, is all in Konopiste,"
she said.
The family fought the Czech law, even after the Communists came to power after World War II, to no avail. They made diplomatic inquiries after the collapse of communism, but got nowhere.
Then, in 2000, the princess's mother entrusted her with the battle. In December, von Hohenberg filed a lawsuit at a court in Benesov, the town nearest the castle, hoping to successfully challenge the law.
"
What I'm trying to do is attack this law which is unjust and wrong,"
said the princess, 46. "
If I win my case, they have to give back what they confiscated, logically, but my first wish is to make this article of law disappear."

She recalled her first visit to the castle after the Velvet Revolution, which brought about the fall of the Communist government. She was accompanied by her husband, Jean-Louis de Potesta.
"
I was very, very moved,"
she said. "
I suddenly knew where I belonged, which I never felt before. I suddenly knew where my roots were."


On her second visit, she identified herself and refused to pay the $9 admission.
Konopiste Castle is one of the most beautiful of the 90-odd castles owned by the Czech Republic and is certainly the most elaborate in its furnishings. The walls of the castle's public halls are mounted with some of the roughly 300,000 animals that Franz Ferdinand shot during his lifetime.
The collection is interspersed with Franz Ferdinand's extensive collection of 15th-century polychrome wooden religious statues.
Several rooms are devoted to a collection of medieval and Renaissance armor, much of which he inherited from his uncle.
Hitler's Schutzstaffel, or SS, took over the castle during World War II and sent much of its contents to Austria, where they were discovered after the war, stored in a salt mine.
Almost everything was recovered except for objects made of gold, which had been melted down by the Nazis. The children's toys are also missing, distributed to kindergartens during the Communist era when the castle was used by the Czech Ministry of Agriculture.
There have been several royal restitutions in Europe since the fall of communism. The Czech Republic itself has returned a lot of property seized by the Communists after 1948. But the courts in countries in the historically turbulent part of the world have been reluctant to address property claims before then.
The Ministry of Culture spends more than $800,000 a year to maintain the castle, about the same as the property earns from ticket sales and rental fees for occasional functions. The castle's chapel is popular for weddings.
It is classed as a national cultural historic monument, which means that were von Hohenberg to recover the castle, she would not even be able to move the furniture without approval from the state landmark authorities.

One of the most glittering society weddings of the year took place at the weekend when PR businessman Anthony Bailey – a former pizza parlour assistant turned self-made millionaire - wed his regal love Princess Marie Therese von Hohenberg of Austria. The couple, who first met 14 years ago but began dating last year, exchanged vows in front of a host of dignitaries including Lord Nicholas Windsor.

Marie-Therese, an architect and direct descendant of the former royal dynasty which ruled the Austro-Hungarian Empire, no doubt took the groom's breath away as she arrived in a lace gown with sweeping veil and train. She was followed by several little bridesmaids and pageboys, all smartly turned out in the Austrian national colours of red and white.

Six hundred guests were invited to the ceremony at the Abbey of St Peter's in Salzburg, which was followed by a reception in the Salzburg Festival Hall and a white tie ball at the country's former royal palace, the Residence of Salzburg. The festivities are reported to have cost over £1 million.

Among the wedding party were, of course, Anthony's parents - Colin, a retired engineer, and Irish-born Veronica, who has worked with foster children. The couple had previously admitted to being stunned when their son announced his engagement to the 35-year-old descendent of Archduke Franz Ferdinand, the assassination of whom triggered WWI. Anthony, 37, who started dating Marie-Therese last year, proposed to her at his holiday home in Portugal on New Year's Eve.

LONDON - 25 January 2007 - 211 words
Papal Knight to marry Princess
The engagement has been announced between Mr Anthony Bailey, KCSS, of London, younger son of Mr and Mrs Colin Bailey, of Drumcannon, County Waterford, Ireland, and Princess Marie-Therese, younger daughter of Prince Peter von Hohenberg, of Vienna, Austria, and Princess Christine von Hohenberg, of Salzburg, Austria.
Princess Marie-Therese is the granddaughter of Duke Maximilian of Hohenberg, eldest son of Archduke Franz Ferdinand, whose assassination in Sarajevo in 1914 lead to the outbreak of World War One. Princess Maria-Therese, born in 1972, is a Vienna-based architect. Her father, Prince Peter is a retired banker and her mother, an artist.
Mr Anthony Bailey, born in 1970, is the third son of British-born retired engineer Mr Colin Bailey and Irish-born Mrs Veronica Bailey, who for many years has been fostering abused children. They live in Drumcannon, County Waterford, Ireland.
One of the leading Catholic fundraisers and benefactors in the country, Mr Bailey was granted a Papal Knighthood by Pope John Paul II for his many charitable, humanitarian and interfaith intiitatives - among them the Three Faiths Forum. He is involved in several government advisory bodies dealing with interfaith, education issues and prison reform in the UK, and has extensive experience in dialogue, peace and reconciliation work in several middle eastern countries. 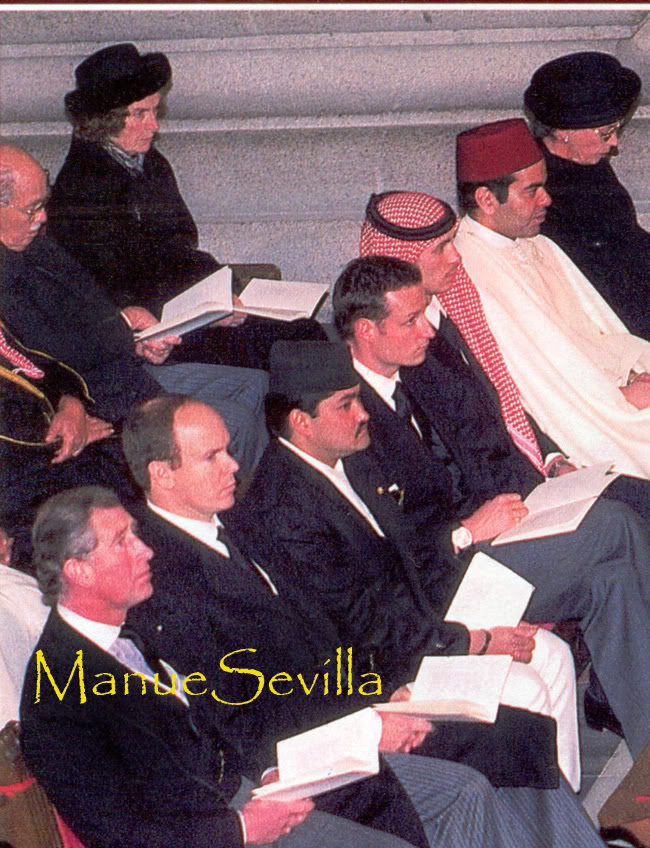